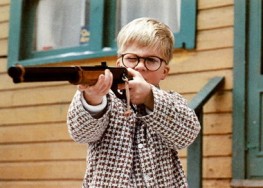 In 1983’s “A Christmas Story”, the affable and ever-scheming Ralphie conspires to assure he receives the “Holy Grail of all Christmas gifts,” the Red Ryder 200 shot range model air rifle BB gun with a compass in the stock, and “this thing which tells time.” Believing this to be the best gift a boy could ever receive, Ralphie, despite dire warnings of serious eyeball injury, will not be dissuaded, and goes to any length to achieve his quest. His father understands and ultimately makes Ralphie’s Christmas the best ever!

Just like A Christmas Story, I have my own tale of the best gift ever. It was the mid 1970’s, and we were the only family in the neighborhood who did not have their own snowmobile to ride. My oldest siblings had grown to maturity, somehow surviving adolescence without skipping across the white, winter landscape at high rates of speed, but for my younger brother and I, another snowmobile-less winter meant certain black-balling, consigning us to lonely days playing by ourselves indoors while all the other kids sped to and fro on their shiny snow-machines.

Our family tradition for Christmas at the time was to start the holiday festivities with a great family gathering and feast on Christmas Eve, after which we would attend midnight mass, before attempting to sleep despite our childish excitement for the glorious gift opening that would occur the next morning. Despite our later than normal bedtime, my brother and I were usually up at the crack of dawn, to the certain glee of my grandmother, and possibly the exasperation of my otherwise loving parents. This Christmas was no different, at least as far as my brother and I could tell.

For children, even teenagers, who are focused on the Christmas Day gift opening ceremonies, Christmas Eve family time can seem a bit lengthy, and dare I say, tedious. To add midnight mass to the evening seemed insufferable. I can only imagine we were not the most pleasant company for my parents as we sat among their friends and neighbors for the late night church service. I’m almost certain we were fidgety and prone to misbehavior, though I honestly don’t recall specifics. To us it seemed only the normal torture that must be endured prior to the delight of Christmas morning.

Christmas morning came that year, as it normally did, with gifts aplenty under the tree. I cannot recall with any specificity a single present that I opened, but the opening ceremonies took the usual form and, I think, the standard amount of time. And then it was over, all the gifts opened, all the wrapping paper properly placed in garbage bags ready for disposal. Life was pretty good…..and then my father uttered a sentence that remains more or less in my memory to this day, “There’s one more present I’m going to need your help with.” And we were instructed to follow him to the garage, which we did, with my mother and the rest of the family close behind.

And there it was. The greatest possible gift a kid in his teens could ever receive, a shiny Arctic Cat Panther snowmobile, with the 303 Wankel engine, perched upon a trailer, right there in our garage. It would be an understatement to say my brother and I were flabbergasted. I think the surprise and excitement my brother and I felt at that moment was beyond description. We had a snowmobile! But how? We had been in the garage during the festivities the night before. There was nothing in there then. How exactly did this snowmobile magically appear? Was Santa Claus real after all?

It turns out Mom and Dad must’ve loved us more than we could imagine. So much so that they went to great lengths to purchase this perfect (and rather large) gift; and then enlist the aid of their close friends, Mr. and Mrs. Knight, who concealed the beautiful black sled at their house, and then delivered it to our garage while we squirmed and fidgeted during midnight mass. We came home and went to bed none-the-wiser. A flawless and extremely well-executed, and somewhat devious, plan. I never knew, before that morning, that my parents’ had such clandestine capabilities.

I have received many wonderful gifts in my many years on this planet, most of which I can no longer specifically remember, but none was as memorable as that Arctic Cat Panther snowmobile. But there is another gift I received that was even greater, and that is the gift of eternal life through the sacrifice of Jesus Christ. “For God so loved the world that he gave his one and only Son, that whoever believes in him shall not perish but have eternal life.” (John 3:16) And this gift is available to all, including any of you reading this now. Have you availed yourself of this gift? It’s absolutely free!

Merry Christmas to you all and may you experience the joy of our Savior during this holiday season. As always, feel free to drop us an email at ReignDropsBlog@gmail.com.