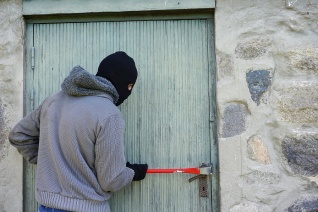 Leon had carefully prepared for his day. He had several stops planned on his route and wanted to be sure he had the proper look. He chose his new Wrangler jeans, his favorite Carhartt shirt, and his well-worn Red Wing boots. He topped off the look with his black USA flag baseball cap. He couldn’t completely avoid being seen by people today, but he didn’t want to stand out or be particularly memorable. Just an ordinary guy going about his ordinary business. He’d walked through this neighborhood a few times before, so he wouldn’t be an entirely new face, and he counted on that familiarity and his “every man” look to provide a sort of hidden-in-plain-sight kind of cover.

But someone did notice him today. As he walked up the driveway of 149 West Street and around the corner into the backyard, he caught the eye of old lady Brownswick. She lived across the street and she knew her neighbors were visiting Israel on vacation. Their dream vacation – walking where Jesus walked – and their excitement drove them to make sure everyone in the neighborhood knew; but especially Mrs. Brownswick. Because they knew she would keep good watch on their home during their absence. And that she did. So when she saw Leon slip around to the backyard, she immediately called the police.

And as Leon came back out of the house at 149 West Street, he walked almost directly into the arms of waiting police officers, who promptly placed him under arrest. In the normal course of the process, police searched Leon and found several of the ordinary items an adult male might carry, but one item in particular caught the arresting officer’s attention. It was a small piece of paper, folded neatly in Leon’s wallet. The officer unfolded the paper and found, much to his surprise, Leon’s personal code of conduct, a list of five rules he operated by:

“Oh, here we have an honorable thief,” thought the officer, as he chuckled and starting showing the paper to the other officers on scene. They all had a good laugh and they mocked Leon without mercy as they placed him in the back of the patrol car. Those rules had served Leon quite well over the last three years, ever since he left his job as a jewelry store employee and started his criminal career. He knew how to spot high quality jewelry and stealing it made him far more money than selling it retail, at least until today. And thanks to those rules, he never had to feel guilty about any of it. At least, that’s what he thought at the moment, but that would soon change when he stood before the judge at his sentencing.

In case you’re wondering, Leon is a purely fictional character, made up to illustrate a point – that we are all kind of like Leon to some extent. For do we not all have our own “personal code of conduct” that guides our daily lives? And just as Leon tried to differentiate himself from other, less considerate and more violent criminals, do we not also compare ourselves to others who we feel are worse people than ourselves? Who among us has not thought himself or herself to be “mostly good” or “better than” another human being?

But the truth is, way deep down inside, we each know we have done wrong. So when we compare ourselves to others to feel better, are we not truly just pursuing honor among thieves?

The Bible tells us that “everyone has sinned; we all fall short of God’s glorious standard.” (Romans 3:23) And even though we may not have specifically read God’s law, we demonstrate that it is written in our hearts when our own conscience and thoughts either accuse us or tell us we are doing right (see Romans 2:14-15). None of us would ever claim to another person that we are perfect, so we are being disingenuous if we claim, even to ourselves, that we are without sin. Therefore, we often resort to creating for ourselves a sort of curve upon which we hope God will grade us. “We may not be perfect, but at least we never….(insert name of some specifically horrible sin here).”

But even though our personal sins may be on what we perceive to be the minor end of the scale, a thief only has to steal one little thing to be labeled a thief. A liar only has to tell one small lie to be labeled a liar. And, indeed, the Bible tells us “the person who keeps all of the laws except one is as guilty as a person who has broken all of God’s laws.” (James 2:10) So we know God doesn’t grade on a scale. He is a perfect, righteous, and loving judge and, as such, he must punish sin where ever it is found just like a just judge must impose a penalty even for a minor crime such as speeding. And if we claim we have no sin, or our sin is not as bad as someone else’s, we are only fooling ourselves, and it only shows that the truth is not in us. (see 1 John 1:8).

But the same holy and just God who must punish sin wherever it is found, loved us so much he paid the penalty on our behalf so that we do not have to suffer the eternal consequence. “For this is how God loved the world: He gave his one and only Son, so that everyone who believes in him will not perish but have eternal life.” (John 3:16) All we need to do to assure we avail ourselves of this love is to repent and believe. “In fact, it (The Bible) says, the message is very close at hand; it is on your lips and in your heart. And that message is the very message about faith that we preach: If you openly declare that Jesus is Lord and believe in your heart that God raised him from the dead, you will be saved. For it is by believing in your heart that you are made right with God, and it is by openly declaring your faith that you are saved. As the Scriptures tell us, anyone who trusts in him will never be disgraced.” (Romans 10:8-11)

So don’t be like Leon and count on a favorable comparison of yourself to others; rather, trust in God’s Word and the ultimate love he has shown by paying our sentence for us. Make today the day you accept the free gift of salvation through Christ our Lord!

Here at Reign Drops, we’d love to hear from you. Please leave a comment or drop us an email at: ReignDropsBlog@gmail.com