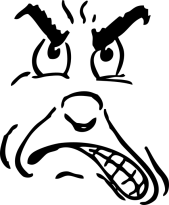 A while back, a member of my family was at dinner with a coworker when the coworker shared his religious beliefs with her. I was not there, and did not hear the conversation, but judging from her Facebook post she was very angry about the whole thing. Then just last week, someone I work with came in complaining about a similar encounter. Apparently she had been shopping at the Mall of America when a Christian approached her and shared the Gospel message. She was quite upset about it.

Now I was not there to observe either of these encounters, so it is hard to form much of an opinion about them specifically, but having observed the angry responses from my relative and my coworker naturally raises my curiosity about them. Perhaps the coworker sharing his faith or the Mall of America Christian made poor presentations of the Gospel message, thus eliciting such indignation, but could there be more to it than that? After all, it’s not uncommon for the Gospel message to provoke an angry retort.

So why do people get so angry when the Gospel message is presented? After all, Jesus is God incarnate, who gave up his heavenly position to dwell among us, to experience life in a sinful world the same way we do, to teach us and to heal us, and then to die a horrifyingly brutal death for us that we might be redeemed for an eternal life of pure happiness and contentment. As humans we break God’s laws every day, we intuitively know we are guilty, yet Jesus took the penalty for us so we might be spared. That is the ultimate act of unconditional love, yet people get angry when we talk to them about Jesus. Anger hardly seems the correct response to such acts of love.

There are probably multiple reasons for the anger. A poor presentation of the Gospel message, one that is delivered in a judgmental tone, that comes across as disrespectful or condemning, probably fails to capture the true love of Christ that is inherent in the real Gospel. To anyone who has heard the Gospel presented in such a way I will take this opportunity to sincerely apologize. The only time Jesus presented any message in a harsh tone was when he was speaking to religious leaders about their hypocrisy. For Christians, our mission, as assigned by Jesus himself, is to go into all the world and make disciples. If we follow his example, he always called sin out for the wrong that it is, but he presented the truth in a compassionate manner that was winsome and understanding, with a clear directive toward repentance and change.

But I don’t think the sole reason for such angry reactions to the Gospel is poor presentation of the message. I think we might see another reason for the ill-tempered reception of the message in John 3:19-20: “This is the verdict: Light has come into the world, but people loved darkness instead of light because their deeds were evil. Everyone who does evil hates the light, and will not come into the light for fear that their deeds will be exposed.”

Now, no one wants to think that their actions are evil, but in this case evil simply means that which causes pain or sorrow. The original Greek word used in verse 19 is ponéros and, in verse 20, the Greek word used is phaulos, which primarily denotes that which is trivial, slight, common, or bad. In other words, the “evil” John referred to in these verses isn’t necessarily limited to murder, stealing, rape, or other blatant acts that we all can easily call sin. Rather, he is referring also to those more common sins that many of us like to justify in ourselves. Things like drunkenness, sexual immorality, gossip, foul language, selfish ambition, and the pursuit of possessions are all included. Since people tend to rationalize their behaviors, I think it’s reasonable to conclude that when we share the Gospel we shine light on sin and that’s where a lot of the anger comes from.

People do not like to be told there are moral absolutes. And our sinful desires seem so innocuous at times that it is easy to defend our behavior. After all, if it “feels right” it must be OK, right? I have to admit to being no stranger to this line of thinking (for I, too, am a sinner). But our feelings can’t make something right or wrong. In fact, relying on our feelings can be conspicuously self-deceptive. In Proverbs 12:15 we read, “The way of fools seems right to them” and in Proverbs 16:25, “There is a way that seems right to a man, but its end is the way of death.” The reality is that, much like our parents set rules for us because they loved us so much, it is another evidence of God’s love for us that He has established moral absolutes – rules that are meant for our own good.

But we like to legitimize our behavior so when the truth is pointed out, we get mad. The Apostle Paul taught us in Romans 1:19-20: “…what may be known about God is plain to them, because God has made it plain to them. For since the creation of the world God’s invisible qualities—his eternal power and divine nature—have been clearly seen, being understood from what has been made, so that people are without excuse.” In other words, we may justify our behaviors, we may deny the existence of absolute truth, but the fact remains that each of us inherently knows God is real and, therefore, we are without excuse.

Which means we really, really need a savior. And that’s where Jesus comes in. In an astounding act of pure and selfless love He gave His all that we might live. And the truth is, He loves you even if that fact makes you angry!